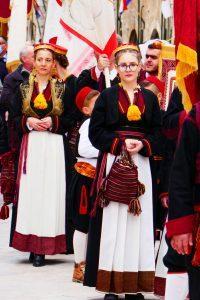 Saint Blaise or Sveti Vlaho has been the patron saint of Dubrovnik since the 10th century. In the year 972, he appeared in a dream to a local priest to warn of an attack of Venice, Dubrovnik’s great rival for control over the Adriatic Sea. The city was thus saved. Since Saint Blaise protects the city and is celebrated every February 3 until today.

This moment is very important for the city-state Dubrovnik because it obtains not only its own bishopric but also its own archbishopric, which is a great sign of independence in the Middle Ages. A new saint marks a new political era. As he was a martyr, Saint Blaise precisely conveys an image of freedom and free will.

The choice of Saint Blaise is strategic because it corresponds to the diplomatic and commercial positioning of Dubrovnik between the West and the East. Indeed, Saint Blaise is a saint whose cult is widespread throughout the Mediterranean, from Minor Asia to western Europe.

Saint Blaise lived in the 3rd century AD in Sebaste in Cappadocia in the first Christian state. Coming from a wealthy family, he studied medicine. He treated both humans and animals. His great miracles are to have saved a child who was choking on a fish bone and to bring back a piglet led by a wolf. It was for his first feat that he became the protector against sore throats. On February 3, the inhabitants of Dubrovnik have their throats blessed by the priests who place two candles arranged in a cross around their necks. 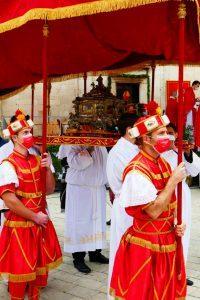 He was martyred by being flayed alive with a wool comb. This instrument has become one of its symbols. Thus, Saint Blaise also protects the shepherds and the flocks. In many towns in France, cattle were blessed on Saint Blaise’s Day. Here we find a strong parallel with the ancient Slavic mythology where Volos, god of shepherds and prosperity, was venerated. Moreover, the word Volos has evolved to give Vlaho, the Croatian word for Blaise. Due to the mountainous configuration, the inhabitants of the interior of the Balkans were traditionally shepherds.

Saint was introduced in France by the Benedictine nursing monks, first along the valley of the Rhône, then in Lorraine, Burgundy and Alsace. It was always linked to the protection of flocks, the work of wool and medicine. We find traces of the cult of Saint Blaise in Milly la Forêt and in Orléans. It was particularly popular during the Great Plague in the 14th century.

The city of Dubrovnik boasts many relics of its saint, including his skull. On Saint Blaise’s day a mass takes place in Dubrovnik Cathedral, that ends with a procession with the relics. The inhabitants of all the territories around Dubrovnik still come today to parade in traditional costume in the old town decorated with laurel garlands. It is a magnificent celebration rich in emotions and colours. 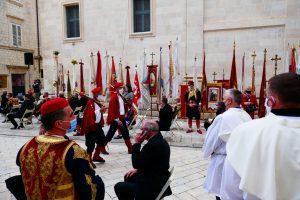